We are currently seeking a lender that shares the same passion for aviation, golf, and the outdoors to develop Aero Estates Chateau & Golf – a 3,700-unit residential airpark and golfing community.  The lender will likely be someone or a group that shares the same passions and is looking for a fun, profitable and exciting project that is sustainable and legacy worthy.  The grand scale of this project will be the largest, most modern and elaborate residential airpark and golfing community in the world.  Aero Estates Chateau & Golf will provide an unforgettable lifestyle for its residents and visitors and will leave an everlasting impression on generations to come. Let’s build that dream!

The Veteran-Owned Company seeks to team with a lender who also has a passion for aviation and golf, and the vision to answer the call of aviators and aircraft owners who dream about living with their plane. Together, we will build one of the finest airpark and golfing communities in the world with stunning amenities that will take community living to the next level.

“I have the passion to build airparks, the ambition, the drive, the focus, the constant dreams…”

Robert Huber the developer of Aero Estates Chateau & Golf, had the opportunity to develop Aero Estates Airpark (T25) with his family into a beautiful residential airport community on a limited personal budget. Since then, he has had the continued aspiration to develop and build a first-class aviation and golf community. Robert began conceptualizing Aero Estates Chateau & Golf while living in Europe and has spent many years and late nights conceptualizing, consulting, pricing, and dreaming of an opportunity to build a first-class residential aviation community. Providing other aviators and golfers alike, the opportunity to live out their dreams in an upscale residential airpark.

You may have heard that there’s nothing like being able to walk out of your back door to your hangar into your plane and taking off for an adventure. Many fantasize about the lifestyle of living in a community of like-minded and fun-minded aviators, aircraft owners and golfers. More and more pilots, aircraft owners and golfers are finally deciding to stop dreaming and to start living at airparks and golf communities across the country. 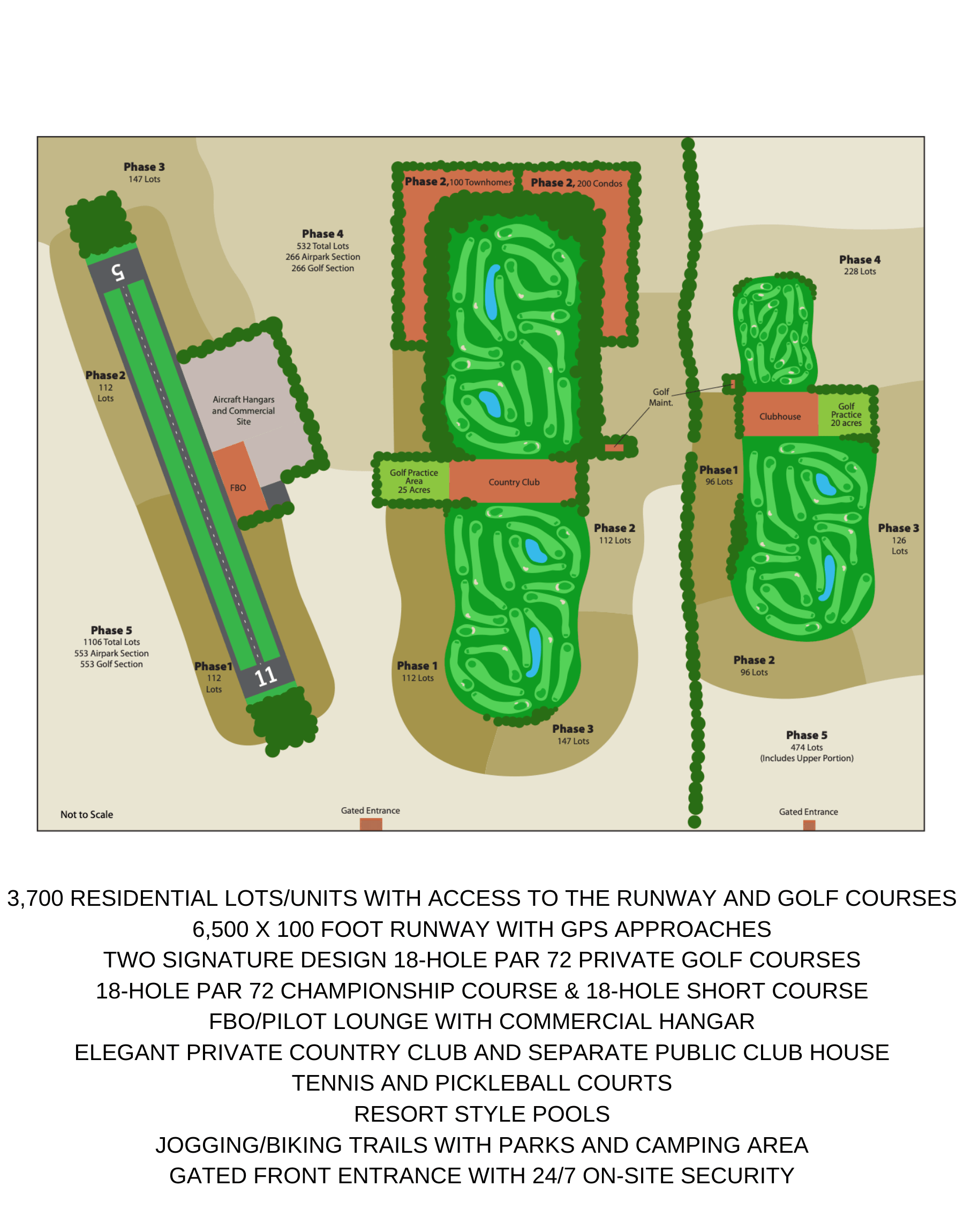 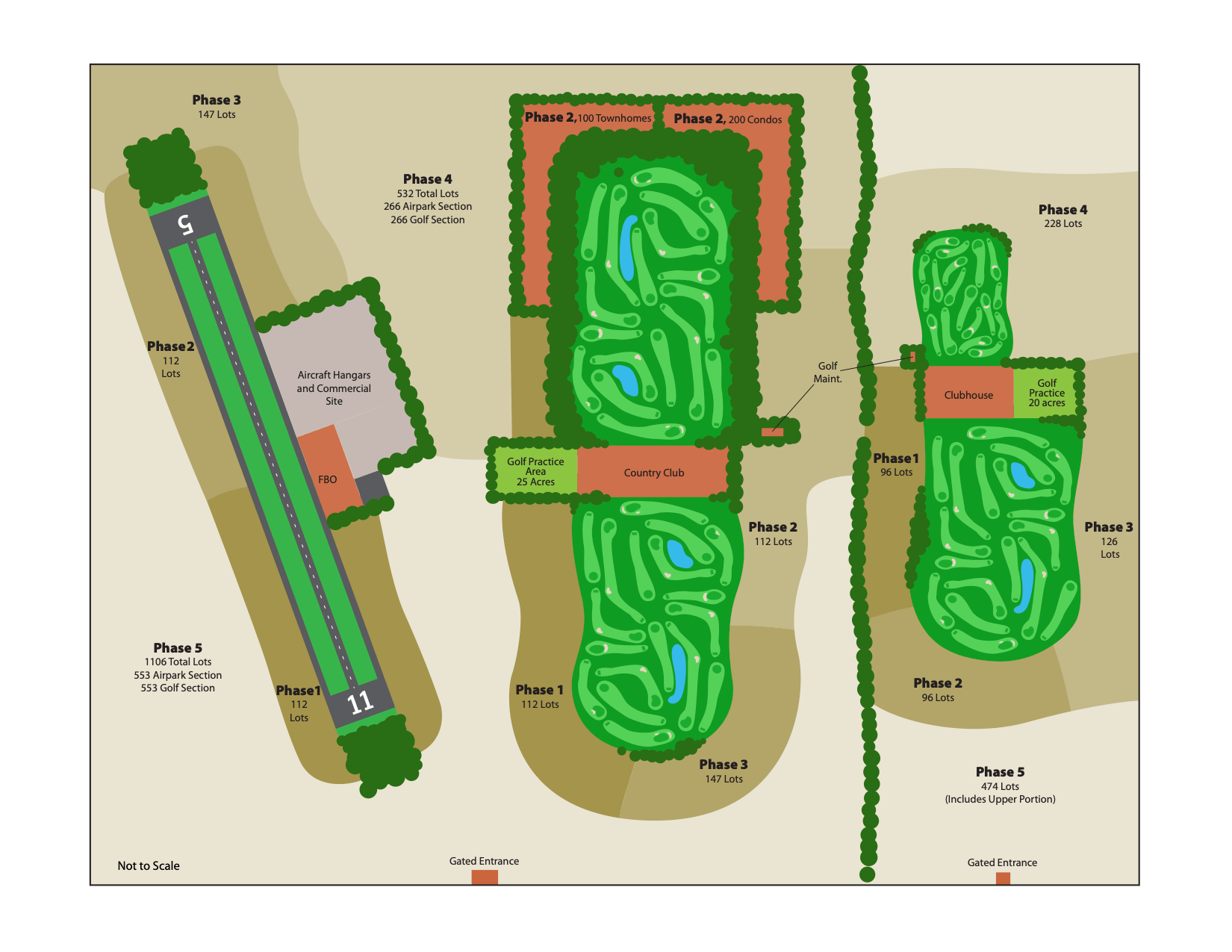 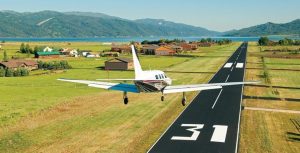 The 12,500 square foot Executive FBO/Pilot Lounge will be the place to plan your next flight, link up with your pilot or passengers, relax with fellow aviators, address any last-minute business needs, enjoy a museum of aviation articles and enjoy some refreshments. The 8,400 square foot canopy provides a covered aircraft parking area, allowing drive-up service for even the largest private aircraft. The FBO will include full-service maintenance, full and self-service fuel, an attached 33,000 square foot hangar, and a 240,000 square foot aircraft parking area; combined will be yet another aviator hangout. An opportunity exists for a lease to own FBO to provide primary support services to the general aviation community.

An elegantly designed private country club and a public club house with fitness center with day spa, resort style pool and outdoor spaces are good for pleasure and business. With the right amenities and features, the surrounding country club location becomes a go-to destination for friends and family when they’re not in the air, playing a round of golf, tennis, pickleball, biking or enjoying the other amenities available. The private country club with front and back wrap around covered patios, will be furnished comfortably and with a touch of custom decorative accents, romance fireplaces and lighting to capture the moment. The club will be the focal point for those playing golf, tennis, pickleball, swimming, enjoy a meal or just a common place to come and meet friends to relax.

The modern designed guard-gated front entrances will be the vehicle entrance point for the community. Security guards will control access, enhance the safety of the residence and their assets, and provide an added level of protection for the airpark amenities. We will leverage security technology solutions to automate entry procedures for the residence, easily allow registering of guests and to monitor activity outside and within the airpark. All designed to maximize safety, protect you, your family and your property.

Two (2) championship-level signature  designed 18-hole golf courses located on the private residential airpark and golfing subdivision, and a public 18-hole championship course along with a world-class short course. We will team with a well-known and respected golf course designer(s) to create the four course masterpieces. Some people think golf is a sport stuck in traditional ways, but it is actually constantly evolving. New and exciting courses have battled their way into the golf rankings and we’ll make every attempt to achieve the expert’s high ranking. The course layouts will focus on testing a pro golfer’s skills through a variety of doglegs, distances, and hazards through a diversification of different shots. The intent is to design each course around the ambiance, where you can sense the traditions of the game of golf.

There’s nothing more refreshing than plunging into a sparkling pool on a hot day with the blue sky above. The two (2) semi-private “waterfront” tailor-designed resort-style pools will feature infinity edges, lap lanes, water features, a splash park, glamorous landscaping, cabanas, and automated cleaning and heating. The pool areas will be an extension of the country club coordinating trim details and colors, to include an outdoor kitchen for parties and gatherings.

Sports are great for so many different reasons. They all (well most) offer great workouts, competition, camaraderie and fun. But what sport is the best? Well tennis is, of course! Four synthetic clay lighted tennis courts will be the ideal competition venue for the competitive player or maybe take a lesson from someone to improve your game. The courts will be separated by covered sitting areas to relax between games and to enjoy time with friends.

The extensive jogging, hiking and obstacle course trail system throughout the fly-in community will provide an outdoor sanctuary for those interested in exercising, exploring, hiking, walking or just enjoying the natural wilderness.

**Investor payback period is in year five and the return on investment at the end of year ten, funds generated from sales will support the remaining development and operational costs.

Our marketing plan focuses on strategically placed magazine advertisements and attending selected domestic and international aviation and golf trade shows 7-times a year. Internet and social media marketing (YouTube channel, Vlogs, etc.) remains our core focus for driving potential customers to our website to attract buyers to meet our sales goals. Our sales team will be comprised of the Director of Sales & Marketing, two Sales Managers, the Developer and Managing Director. We will explore options to advertise and develop sales in not only domestically, but in Canada, Europe, Asia and South America. We will accomplish this through the following means:

Robert’s family founded a company to provide aviation enthusiasts with a pilot-friendly community in a shared interest residential environment. Robert was responsible for property development, directing daily operations, future expansion plans, and marketing. It was a great opportunity and time to conceptualize and develop the property with his father George and stepmother Maud. They built a beautiful airpark on a shoestring budget, based on hard work, determination, perseverance and a lot of learning along the way. Of course, they made mistakes, and then quickly learned from them. They also learned how important it is to work closely with the Property Owner’s Association on many issues that affected the community as a whole. They had numerous fly-ins and brought in the surrounding community from around the airpark to get them better antiquated with the neighborhood. Residents enjoy afternoons and evenings on the lakefront paired with gatherings, boating, water sports, and watching float planes come in and out.

Robert developed and sold 167 residential airpark lots at Aero Estates. He attended numerous airshows like EAA AirVenture Oshkosh Fly-in Convention in Wisconsin and the Sun-n-Fun Expo in Florida as an exhibitor to get exposure and successfully generated business. Robert routinely placed advertisements in magazines, sent brochures from purchased mailing lists, sent monthly emails to potential clients and provided personal tours of the airpark. In 2005, Robert bought his father and stepmother out of the business and then sold the remaining few acres of property in late 2012.

Robert received a Bachelor of Science in Aeronautical Science from Embry Riddle Aeronautical University in Daytona Beach, Florida in 1997. He is a certified Project Management Professional (PMP), who holds a Commercial Pilot Certificate with Multi-Engine and Instrument Ratings, and a combat veteran with multiple tours. He is currently a Program Manager supporting international and domestic project initiatives that span the fields of Intelligence, Biometrics, and Identity Management. Robert has a successful track-record in land development, residential airpark operations, program management, problem solving, sales, and training. Robert began conceptualizing Aero Estates Chateau & Golf while living in Europe and has spent many years and late nights conceptualizing, consulting, pricing, and dreaming of an opportunity to build a first-class residential aviation and golf community.

Jay has been in the golf and country club business for more than 30-years and has managed some of the most prominent clubs in the World. Jay’s resume includes 7-years as General Manager at Merion Golf Club currently ranked by Golf Magazine at #12 in the World and #6 in the USA. Merion is the site where a young Bobby Jones closed out the Grand Slam in 1930 and Ben Hogan won the 1950 U.S. Open only a year after nearly perishing in a horrific car accident. Merion has hosted more U.S.G.A. Championships than any other club.

Most recently, Jay took over as General Manager at Lanhai International Golf Club outside of Shanghai, China. Lanhai had recently been acquired by the PingAn Group, the wealthiest insurance company in the world and whose Chairman has a passion for the game of golf. Among other improvements, Jay worked with OCCM, Tour Pro Geoff Ogilvy’s team to fully renovate one of the two courses on property. The renovation drew high praise from the dozen Golf Magazine panelists who visited and played the new course. Jay has also worked with Nicklaus Design, Fazio Design and Arthur Hills.